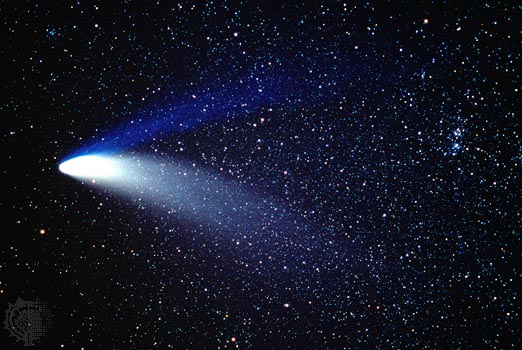 What is a comet?

A comet can be described as a small, icy object that orbits a star (“Comet” G-2).  Comets are ice-rich because they formed beyond the frost line, an area in our solar system beyond which hydrogen compounds can condense into ice (Bennett 258).  Size, origin, and the existence of a tail do not matter in the classification of a comet; an object can be called a comet as long as it made up of mostly ice and orbits the Sun as a comet would.

What is the structure and composition of a comet?

A comet consists of four basic parts: the nucleus, the coma, the plasma tail, and the dust tail.  The nucleus of the comet is a chunk of ice that usually contains a blend of ice, rocky dust particles, and other chemicals (Bennett 259).  The typical nucleus of a comet is a few kilometers in diameter.  As the comet approaches the Sun, its surface temperature increases, causing the ice to change into gas through the process of sublimation.  This gas surrounds the comet and combines with dust to form a coma, which is much greater in size than the nucleus of the comet.  Some of this gas escapes the gravity of the comet and is ionized by the Sun, creating a long tail, known as the plasma tail (“Comets” 1).  The plasma tail extends directly away from the Sun at great distances behind the comet because of the solar wind.  The dust tail forms when dust-size particles escape from the nucleus of the comet and are pushed by the pressure of the Sun’s radiation (Bennett 259).  The amazing visual displays that comets create in the sky occur only when the comet orbits close to the Sun.  Once a comet has cleared the Sun in its orbit, sublimation ceases and the coma, the plasma tail, and the dust tail disappear.

The Discovery of Comet Hale-Bopp

Alan Hale was an amateur astronomer at the time of Comet Hale-Bopp’s appearance.  Hale regularly studied comets and observed them once a week, measuring and recording their brightness (Hale 1).  After dark on July 22-23 of 1995, Hale was observing comets Clark and d’Arrest when he decided to take a look at some other deep-space objects.  He turned his telescope toward M70 (Messier 70), a famous globular cluster of stars, and saw a “fuzzy object.”  Hale then reported the object to the International Astronomical Union (IAU).

Thomas Bopp was another amateur astronomer at the time of comet Hale-Bopp’s appearance.  Bopp and a bunch of friends were viewing various deep-space objects around the same time as Alan Hale when they noticed a faint object in the sky, to the east of M70 (Hale 1).  Bopp and his friends watched the object for an hour, before driving back to his house and reporting the object the IAU.  The IAU classified the deep-space object that Alan Hale and Thomas Bopp had observed as a comet, and named it comet Hale-Bopp in honor of their discovery.

The Structure of Comet Hale-Bopp

In 1998, astronomers of the European Organization for Astronomical Research in the Southern Hemisphere at the La Silla Paranal Observatory in Chile watched through the La Silla Telescope as Comet Hale-Bopp finished its orbit of the Sun and returned back out into space (Karl-Schwarzschild-Strasse 2).  The comet was still very active at 568 million kilometers from Earth and 592 million kilometers from the Sun, displaying an extremely long dust-tail estimated at one AU in length.  The unusually heavy activity of the comet could be explained by the tremendous size of its nucleus, estimated at 50 kilometers in diameter (Hainaut 1).  During observations, astronomers also noticed the presence of an anti-tail on the comet (Green 1).  An anti-tail is a very thin structure that points in the direction that the comet travels; it tends to look very much like a needle.  The anti-tail on Comet Hale-Bopp is thought to have been formed by dust grains escaping the weak gravity of the comet months before any of the observations in 1997 began.

Between February 27, 2001 and March 7, 2001, astronomers of the European Organization for Astronomical Research in the Southern Hemisphere viewed comet Hale-Bopp from the La Silla Observatory once again.  By this time, the comet had traveled approximately two billion kilometers from the Sun.  Even at that tremendous distance from the Sun, comet Hale-Bopp exhibited a massive coma, indicating that it was still being affected by solar radiation pressure.  The astronomers also noted that the plasma tail of the comet was still present and measured roughly two million kilometers in length.

The Composition of Comet Hale-Bopp

On March 29, 1997, a team of astronomers from the Southwest Institute’s Space Studies Department launched a rocket carrying ultraviolet sensors a few days before comet Hale-Bopp reached its perihelion (846 million kilometers), in an attempt to measure ultraviolet light waves reflected from the comet (Reddy 1) (Clark 1).  As it turns out, comet Hale-Bopp contained a noble gas, Argon.  Dr. Alan Stern, director of the Southwest Institute’s Space Studies Department and leader of the team of astronomers was quoted as saying, “The argon signals are weak, but unmistakable.  We had previously suspected their presence, but were able to recently confirm the result when we cross-compared two independent spectra obtained by our rocket instrument back in 1997” (Southwest Research Institute 1).  The team of astronomers announced their findings at the meeting of the American Astronomical Society on June 5, 2000.  This discovery was significant because not only did the team discover the first ever noble gas in a comet, but they also gained precious clues as to the origin of the comet.  After their great success with comet Hale-Bopp, the team of astronomers began preparing an instrument called the ALICE Ultraviolet Spectrometer, which NASA planned to fly to comet Wirtanen in 2003 in search of the existence of more noble gasses.  They also suggested that other NASA missions be created to search for noble gasses as well.

A study done by astronomers at Arizona State University in 1999 found that the gas tails of comets contain high concentrations of ionized carbon monoxide gas (Hathaway 1).  In order to obtain the necessary data, the ASU team observed comets Hale-Bopp and Hyakutake from the Kitt Peak National Observatory in Sells, Arizona.  It was once believed that the gas tail of a comet was composed of mostly water, but this study claims otherwise.  According to the study, there is more carbon monoxide than water in the tail of a comet because carbon monoxide molecules have stronger chemical bonds than water molecules, and therefore, can withstand more solar radiation.  Susan Wyckoff, an ASU astronomy professor, stated, “…Because the gas tails of comets extend millions of kilometers from the nuclei, the molecules need to be able to survive the trip that takes several while exposed to ultraviolet sunlight” (1).  This is the reason for the high carbon monoxide content in comets.

The Origin of Comet Hale-Bopp

The fact that noble gases do not react with any of the elements on the periodic table and the fact that noble gasses can only exist at exceptionally low temperatures causes scientists to infer that comet Hale-Bopp must have formed somewhere very cold (Green 2).  According to page 261 of The Essential Cosmic Perspective, comets come from the outer solar system, with the majority of them originating from either the Kuiper Belt or the Oort Cloud.  The Kuiper Belt lies just outside of Neptune’s orbit and contains about 100,000 comets, while the Oort Cloud lies beyond Pluto and contains about a trillion comets (Bennett 262).

Until the research of Dr. Alan Stern’s team was presented to the rest of the scientific world, many scientists believed that comet Hale-Bopp had formed near Jupiter.  Stern’s new evidence suggests that comet Hale-Bopp formed somewhere near Neptune or beyond because the Argon found on the comet would turn into a gas if it were not cold enough.  Lucy McFadden, a comet specialist, stated that the area near Neptune would probably be the best assumption as to the origin of comet Hale-Bopp because if the comet were from the Oort Cloud, it would have a different composition (Clark 2).